This facility has not yet been rated. 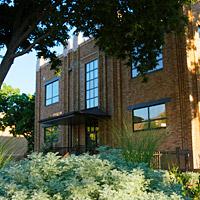 Now in its third incarnation as a public building, the Moab City Center combines a respect for history with a vision of the future. The building was built as a central school in 1934. The Grand County School District shut down the building in 1997 following the construction of another high school and the conversion of the existing high school into a middle school. The City of Moab renovated the building into the new City Center in 2005. Over 95 percent of the original historical structural and shell elements were retained in the renovation of the building. Use of recycled material was integrated into the construction plan. An innovative geothermal heating and cooling system, shared with the adjacent Grand County Library and the City Recreation and Teen Center, utilizes the earths natural stored energy to provide heating and cooling. The site was designed to contain all storm water runoff on site, contributing to recharging the aquifer. Native plants intermix with shade trees and outdoor art to create park-like grounds and public space. Energy efficient electrical equipment, combined with low flow plumbing fixtures, provide a model of sustainable design for the community.

City offices are open 8 am to 5 pm Monday through Friday.